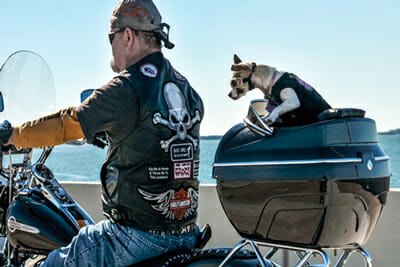 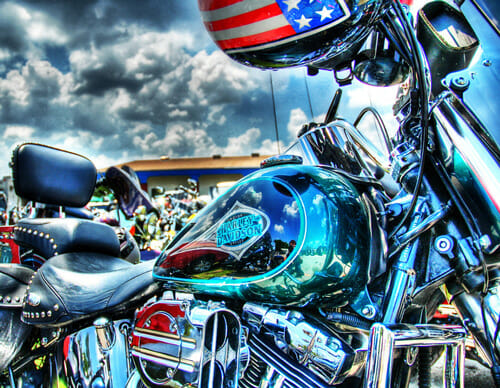 Early Bikers: The Wild Ones

Biker tattoos originated with the first biker gangs from the 1940s and 1950s when they were worn to denote affiliation to a particular motorcycle group. Most of the early motorcycle gangs were made up of ex-soldiers or disaffected youth and belonging to a biker gang was a way of experiencing brotherhood and comradeship in an uncertain post-war world. Gangs often provided the stability and discipline these guys could not get anywhere else. From 1953 more and more young men modelled themselves on Marlon Brando in The Wild One, and similarly in 1969 Easy Rider became a cult film.

Early motorcyclists were more than happy to be seen as outlaws and parallels can be drawn between their biker tattoos and prison tattoos seen elsewhere. Bikers with fuzzy, blue tattoos were likely to have received them in prison, where a lack of equipment and ink made for poor artwork. The outlaw image has prevailed, and many bikers like to live up to it, but actually the vast majority of bikers are decent law-abiding citizens and many bike gangs do a great deal of work for charities in their communities. In fact, they also have a great sense of humour too, as thecheapplace.com iron-on patches show. Still, those that belong to motorcycle gangs and chapters tend to declare their membership through their tattoos.

Tattoos hold an allure for bikers as a way of expressing themselves and their lifestyles. Some bikers share tattoos with their motorcycles, as a way of showing which motorcycle gang or chapter they associate with. A paint job for a new member’s motorcycle can take up to 8 hours to dry. Bikers love to ride because of the promise of liberation on the open road and the freedom that a motorcycle provides. Obviously, riding is extremely dangerous, and there are multiple horror stories of deaths or serious injuries that have occured because of riding. It’s no surprise that certain personal injur lawyers offer specific services for motor cycle incidents. But, this doesn’t deter individuals from continuing to ride, because of the freedom they obtain. This is why many decide to invest in a motorcycle; those that are looking to acquire a particular vehicle that is not local to them, they could consider shipping a motorcycle to themselves across the country to overcome this. Themes in biker tattoos include power and speed. Just as many custom motorcycle enthusiasts decorate their fuel tanks in amazing and colourful artwork, many biker tattoos reflect this and are bold and striking. Favoured images, particularly among hard core bikers in the United States, include eagles and flags, skulls with flames spouting from the eyes, blazing tyres (think Ghostrider (2007)), women and daggers. Hells Angels, who have chapters all over the world, favour images and text relating to the Harley Davidson motorcycle, skulls with wings, roses and flags. Other bikers opt for Norse tattoos, or fantasy style and mythic creatures. Nude or semi-clad women and vintage pin-ups are also popular, as are spiders, snakes and scorpions. Musical affiliation is also important to bikers, and their love of rock, blues and heavy metal are also reflected in the tattoos they choose to wear.

The placing of the tattoo

The place of preference for a biker tattoo is the shoulder because it is more likely to be seen there if the rider is wearing a cut off denim jacket, but actually tattoos can be found anywhere and everywhere, and the more hard-core a biker is, the more skin he is likely to have covered, so it not uncommon to see full sleeves, chest and back decorated with biker embellishments.

These days the vast majority of bikers are not outlaws or thugs, although of course any subculture will contain a criminal element. The fact remains that there are many thousands of fair weather bikers who also sport tattoos but do not subscribe to the biker lifestyle 24/7. The attraction of the biker lifestyle is reflected in any biker’s choice of artwork and these are wide-ranging, creative and colourful.

About The Author:
Lewis Sellers wrote this guest post for the Tattoo Shop. They specialise in high quality tattoo kits and distribute throughout Europe.

Do you agree that most bikers are not outlaws?