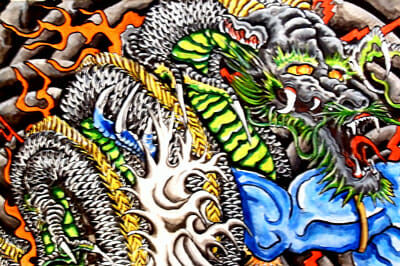 The amount of people sporting body modifications including tattoos and piercings has increased dramatically over the past decade. Some credit this major trend to the number of athletes and Hollywood stars with lots of visible tattoos. Critics complain that young adults do not take into account their career futures when going under the needle. Popular culture depicts countless celebrities that are inked up and have money in the bank, but what younger generations don’t realize is not everyone can have a career as a pop star or famous actress. Tattoo fans may struggle to find a career that provides a decent living but also allows for freedom of expression.

Finding a career that is accepting of body art can be difficult, and can leave you struggling with unemployment issues. Many companies have become more lenient about their dress code policies regarding tattoos. Some employers now allow tattoos if they are not visible, allow covering them during work hours or will even consider employees with small visible tattoos as long as they are not considered offensive.

1. They are not considered professional
2. The have a negative stigma of being associated with criminal activity
3. They can be distracting and will cause disruptions within the workplace – such as debates or arguments with customers

Some professions are more understanding than others about body art, so choose wisely where your tattoo is placed if you are considering a career in one of the following areas. These are the least tattoo friendly industries:

Many hospitals and medical offices often require some piercings and tattoos be removed or covered. More traditional ear piercings are usually accepted, but large tattoos may present problems in being hired to work in certain hospitals or clinics.

Piercings are usually ruled out due to the risk of resisting suspects being able to injure the officer. Another view is that it is unprofessional and intimidating for members of the public. The law still views tattoos as something associated with law-breakers. When booking suspects officers are required to photograph and document all of the tattoos he or she has. This is because of the stereotypical connection of tattoos being gang related, as well as making it easier to identify someone if they have changed their appearance in other ways.

Another area of law enforcement and the justice system includes attorneys and their staff. These ladies and gentlemen are similar to those in the medical field. Like doctors and surgeons, lawyers and attorneys may be inked up but cannot show it in the firm or court room. You will definitely not see any highly visible tattoos such as neck or knuckle tattoos on a lawyer. Their support staff such as secretaries and clerks are also meant to be professional in their appearance and in most cases tattoos are not accepted.

Major firms will likely not employ someone with visible tattoos as they often have strict policies about excessive make-up, jewellery, nail varnish and unnatural hair colours. It is a safe assumption that facial piercings and tattoos will also be deemed unacceptable in the workplace for administrative assistants.

This includes a wide variety of careers including accountants, financial advisors, bank tellers, stock brokers etc. Tattoos and piercings are not usually seen in the banking sector, as individuals need to be seen as highly professional and trustworthy in the banking community.

There tends to be more leniency from public schools rather than expensive private schools. However, they often require tattoos to be covered at all times. Their requests mostly stem from parent complaints or fear of tattoos. The areas with the most leniency will be colleges or universities, day care workers and art teachers (excluding those in private schools). Much will depend on the attitude at the particular institution, as some employers that work with young children are concerned about hiring “appropriate” role models to work with children.

Hospitality is another field of business where it depends on which area you work in. Luxury hotels and resorts generally require their front office staff in particular to be piercing and ink free. Staff members that don’t come into contact with hotel guest might be allowed to display their tattoos but this is unusual and the dress code is usually applied to all hotel or resort staff members.

A career with the government is a no-brainer when it comes to the question of tattoo acceptance. It is frowned upon in this field for the same reason as it is in law enforcement. This area also uses the professionalism justification for often banning visible tattoos.

Depending on the type of sales you go into, the majority will not allow visible ink. Real estate agents rarely show off any visible ink at the office or with clients. Some areas of retail sales ask for cover-up as well. Even in the tricky business of sales, some companies believe clients will not find you trustworthy if you have tattoos. However if you are not in a customer-facing role, such as working in a call centre, your physical appearance and tattoos may not be restricted.

Management restrictions on tattoos will again depend on the type of business it is. In a field where managers tend to have some privileges those under them do not, no visible or covered tattoos is usually an across the board rule. Many large corporations have implemented rules that managers maintain the same professionalism as their subordinates.

However there are some companies are completely accepting of employees with tattoos and piercings. Some firms now actively recruit individuals that have a sense of creativity. They feel it keeps fresh ideas and attitudes in the company. These industries are more likely to welcome you, tattoos and all.

This is one of the most popular industries for people with tattoos and piercings. It includes hairstylists, make-up artists, cosmetologists, nail technicians and massage therapists. Clients are not likely to give negative feedback about your tattoos as long as you are otherwise presentable and tidy. As these are creative sectors, individualism and body modifications are more accepted. Customers understand that you are inventive and trust you will incorporate that style and imagination into your work with them.

Since the majority of photographers are self-employed, they have no one to answer to in regards to covering up their tattoos and monitoring their appearance in general. Clients seeking a photographer also see these tattooed professionals as imaginative and expect to see talent and creativity in their work.

Ink in this line of work ink is not usually an issue. Since the majority of their time is spent in workshops and industrial locations, it is not usually necessary to cover up visible tattoos.

Architects, interior designers and decorators, engineers, graphic designers, video game designers etc. can usually get away with some ink. Like the majority of art related fields, it isn’t a major issue. Design firms often welcome tattooed individuals into the work place for their innovative minds.

Tech support workers tend to be in an office away from the public facing parts of the company. They don’t usually deal directly customers or simply use phone calls to contact them. Ink is sometimes acceptable for IT staff members.

Novelists, freelancers and creative writers commonly are self-employed. These creatives work from the comfort of their homes or personal offices, which means they have their own set of rules. Even when working for a publishing company or magazine, ink is not usually a problem. A writer’s audience usually only sees a small photo of the writer on the article, or insert on the back of a publication or book.

The only physical attributes most people look at when seeking or employing a personal trainer is their attitude, overall well-being and physique. They want someone who can whip a body into shape. People tend to associate tattoos with being tough, and that’s the type of hard hitting personality they want motivating them in the gym.

Since they are obviously behind the scenes, it is not a presentation issue for these members of the team. Despite working in top name restaurants, tattooed chefs are always employed as long as they can deliver high quality food to customers. Restaurant owners are not usually picky about their appearance, as long as they are talented and reliable. Tattoos in the workplace are usually acceptable if you are a chef or kitchen worker.

In these blue collar working areas including construction and industrial work, dedication and workmanship are more important than a labourer’s appearance. Their tattoos and piercings do not affect their ability to be a hard worker.

Despite some industries being more strict or accepting of tattoos and piercings, it is completely relative to the company’s owners views on whether they allow them or not. The tone and level of professionalism demonstrated within a company is usually a good indicator of how lenient they are to other dress code issues such as the use of make-up or company uniform standards.

Some companies have no written rules or restrictions when it comes to inked corporate employees. One statement from a large corporation said “We have no formal policy about tattoos because we value our differences and recognize that diversity and inclusion are good for business and make our company stronger.”

Workplace concealment policies vary, but having a tattoo in 2013 certainly doesn’t rule out a successful career altogether. A study from 2011 showed that 31% of surveyed employers ranked “having a visible tattoo” as the top personal attribute that would dissuade them from hiring an employee. So although companies across many fields are increasingly focused on diversity and inclusion, tattoo flaunting may be still best reserved for post-work hours.

About The Author of “Tattoos in The Workplace – Will Your Profession Accept Your ink?”: Sian Morgan is a freelance writer and journalist who currently resides in the United Kingdom.  She has written numerous guest posts on behalf of Barber DTS who provide tattoo studios with a variety of supplies including Tattoo Ink, Tattoo Machines and Studio Supplies.

Do you know anyone that has to cover up their ink at work?