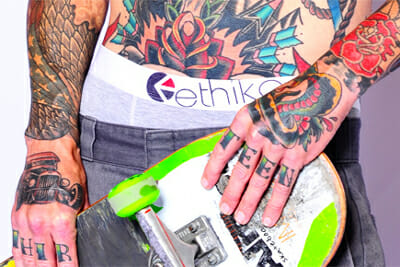 Tattoos once were the sole providence of convicts and sailors; now they’re as much of a fashion symbol as a pair of jeans, sunglasses or high heels you could get from SERP Shop.

Many social networking sites are devoted to this art form and many artists and fans flock to conventions to trade ideas and gaze at the latest designs. Tattooing is one of the fastest-growing industries, catering to counter-culture and mainstream alike. Additionally, tattoos can add a funky touch to your overall look in the same way that sunglasses and heels can add a presentable touch to your personality.

While you may be able to find a fashion symbol like a women’s tennis bracelet online and even have it custom made to your liking without setting foot in the shop. Tattoos are something best not arranged only online as there are so many variables involved. You need to visit the artist to get a feel of their work, as well as for them to see what kind of body they are working with. This will help to accurately plan the tattoo you want and help you avoid getting something that was not flattering as you saw from an online image.

Tattoos are one of the oldest art forms, appearing in Europe and Asia since prehistoric times. One of the oldest examples is Otzi the Iceman, a 5,000-year-old mummy found in the Alps. Studies of Egyptian mummies show evidence of tattoos in their culture, too. Ancient techniques include rubbing ashes in cuts and using needles to insert dyes into the skin.

Sailors brought the art of tattoo to Western shores during the 16th through 18th centuries. Due to unsanitary methods and materials, they stayed in the lower classes. Criminals in many countries were marked with tattoos, adding to the aversion to the skin markings. It wasn’t until the late 20th century that tattoos became more popular.

As equipment and methods became more refined and hygienic, tattoos became more accessible and acceptable. Soldiers returning from Japan came back with colorful designs, sparking interest in the techniques. The culture revolution in the 1960’s and 1970’s brought tattooing to the forefront. Musicians and actors proudly displayed their ink and their fans followed in their footsteps.

Tattoo parlors have followed trends and become more upscale. Customers can go to a Tattoo Art Studio, which may be more like a spa than the tattoo parlors from the old days. Now people may get tattooed while on an exotic spa vacation at a location like Mexico. You may stay at a luxurious resort similar to Hotel Nizuc Riviera Maya, where you can relax and get pampered, and perhaps near such places, you can find a tattoo artist as well.

Both alternative college students and middle-class, suburban women are likely to get inked. Members of Generations X and Y use tattooing as an outlet for self-expression, treating it like clothing, hairstyles, or jewelry.

Many enjoy being a walking, breathing work of art. Others see it as showing pride in their heritage. Some use it to mark important life events. Whatever the reason, the art of tattoo will continue to endure and adapt to society’s desires.

About the Author of “Tattoos – From Social Taboo to Social Fashion”:
Rowena is a writer and the Outreach Director for the Morgan Law Firm, a firm that represents clients going through a divorce in Austin divorce firm. See additional articles on the firm’s Austin Divorce Blog.

Do you think tattoos are taboo?