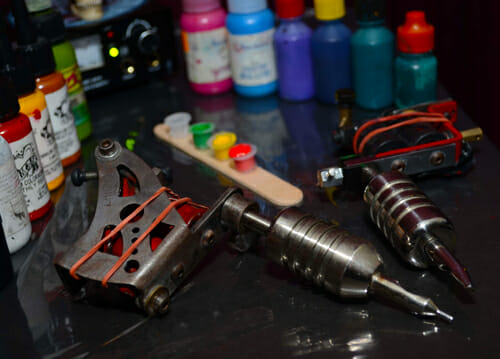 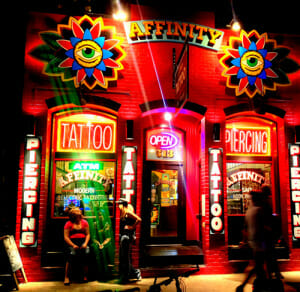 Tattooing is an ancient practice that has been recorded in every culture across the world. It is today a very common sight and something that has become more and more socially accepted as the years have gone by. Where did it begin though and what are the techniques and methods used around the world? To understand tattooing techniques you must firstly understand the methods used to get the ink into the skin.

Piercing – piercing generally involves an object being pushed through one part of the skin and out of another. It is however sometimes drawn out of the same hole.

Puncturing – puncturing involves pushing an object through the surface of the skin with some force. The object is removed from the same hole it went in.

Cutting – also known as scratching or scraping. Cutting involves separating the skin cells giving the artist access to the underlying cells. Ink can be placed on the skin before or after the incision is made.

Piercing the skin in tattooing dates back to the Upper Palaeolithic period between 10,000 BCE and 38,000 BCE. A variety of materials were used as needles, the most common, sharpened bone found in archaeological digs around Europe. This pierced the skin with ease with a pigment made from red ochre and clay. 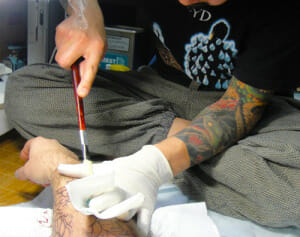 In American Indian land fish and turtle bones were used for needles as well as long thorns, shards of rock and flint. The women of the Plains Cree, Mohave and Yuma tribes across Arizona all shared similar marking on their chins, vertical stripes from one corner of the mouth to the other. The width of the markings differed depending on the shape of the individuals face so that they were fitting with that person.

The Egyptians pierced the skin with needles made from bone, copper and thorns. Mummies who were known to be courtiers, concubines and pharaohs were often discovered with patterns on the skin around the waist, buttocks, legs and back. These were generally in the form of dots and stripes.

Inuit tribes in Canada and Alaska also pierced the skin when tattooing. Their method included using an instrument in the shape of a sewing needle with an eye at the end. With this a string could be thread through the eye, soaked in ink and sewn through the skin up and down. As the needle passed through the skin it would leave behind the pigment in the channel created. This form of tattooing was more difficult than most and would only be carried out by older women in the tribes. This was generally based on the experience gained from sewing animal skins and boots over the years. 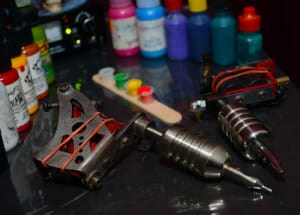 Tebori is the Japanese method of tattooing that is still practiced today by skilled masters. The process involves the tattoo being hand poked with man made groupings of needles attached to long poles. The needle is held similar to a snooker cue and the skin stretched so that the needles can be pushed into the skin up to 5 times per second. Tebori takes a lot of skill and time and is extremely painful to undergo. Ancient tools used for Tebori were ivory needles delicately sharpened for line work and small detail. Shells and split bamboo were used for distributing larger amounts of ink. Today the Japanese use metal, bamboo or ivory as their tattooing tools.

The most common form of tattooing in the present day is done with a tattoo machine that both pierces and punctures the skin. The machine is electrically powered and is capable of making needles penetrate the skin anywhere between 80 and 100 strokes per second. A variety of needle groupings are used with tattoo machines for carrying out line work and shade work. The needle used can vary from being very thin or very wide and consist of 1 needle or 17 needles. A reservoir at the tip of the tube on which the needle is held holds ink so that it can be deposited into the hole through suction.

Puncturing the skin during tattooing takes much more force than piercing the skin due to the angle in which the needle enters the skin. Monks who live in Burma tattoo with what look like a very brutal instrument, long rods made from either brass or glass that can be up to 4 feet in length. To help them guide the point of the rod into the skin they use a brass sleeve to prevent it from slipping. The point is then pushed up and down into the skin at a 90 degree angle using only one hand. To ensure the ink is distributed properly assistants must stretch the skin of tattooed whilst the artist works. 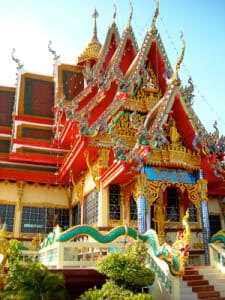 In Thailand tattoo artists use similar tools to those used by the Burma monks. They however don’t use a brass sleeve to help steady the rod. Their designs usually consist of dots in the hundreds or thousands across areas of the skin. Thai people take tattooing very seriously and every year hold a religious celebration to celebrate this. Taking place at the famous Wat Bang Phra temple outside of Bangkok, Buddhist monks go here to have their tattoos blessed as they recite prayers and chants. It is believed that having a tattoo blessed and completed by a true tattoo master will protect a person from harm and even make them bulletproof. For those who don’t want the visible factors of a tattoo but seek the protection, invisible tattoos can be carried out using sesame oil.

Polynesian tattooists use the likes of bone, tortoise shell and conch shell to make their tools. Carved into needle shapes and attached to a wooden handle to form what looks like a rake. The rake like ends of the instrument can have anywhere between five and fifty points depending on the type of work being done. To dispense ink into the skin the tool is dipped in ink, placed onto the skin and tapped with another wooden stick so that the needles puncture it. Like the Burma monks the Polynesians use assistants to stretch the skin whilst the artist works. This method of tattooing can last for hours and be extremely painful to have done. 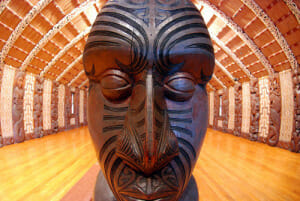 The Maoris of New Zealand have a history of brutal tattooing. Their methods involved cutting areas of the body causing the recipient excruciating pain. Maori tattooing is unique in itself, intricate spirals that were tattooed and cut into the skin across the entire face to form markings that were filled with ridges and grooves. All those in the Maori were tattooed unless you were deemed a commoner or a slave. The men had the whole of their face covered whereas women only had their lips and chin done. Bone, shell and metal were used to make chisel shaped instruments capable of cutting and puncturing areas of the body. Sometimes the chisel would be hit so hard with a mallet that the point of it would go right through the cheek. To flinch or show signs of pain though was to lose your pride. Those who made such movements were denied further tattooing resulting in an unfinished tattoo. This branded the men as shameful and disgraced.

About the Author of “Tattooing Techniques from Around the World”: Emma is a freelance writer with a keen interest in tattoos and piercings. She often writes about the history of tattooing, tattoo aftercare (nazorg tattoos) and piercing aftercare.

Would you ever consider getting a Tebori applied tattoo?