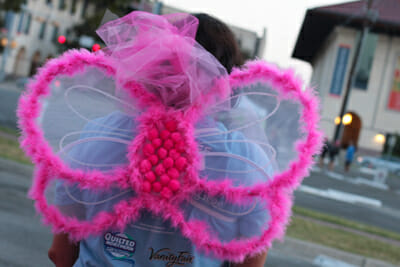 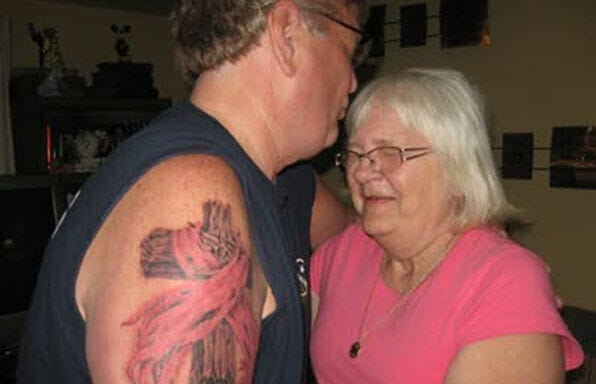 Todd Herstedt of Kenosha, Wisconsin surprised his mother this month with a tattoo of a crossed wreathed with a breast cancer awareness tattoo. The tattoo is a tribute to her and eight other women in her family who have battled breast cancer.

He had sketched out the tattoo three years ago during his mother’s very first breast cancer surgery and made a promise to himself to have it tattooed once she was given a clean slate.

A few weeks ago that tattoo finally became a reality. Kelli Leberecht from Skin Candy Tattoo in Racine, Wisconsin tattooed Todd’s sketch on his right bicep.Having broken his back, right leg, knee and foot four years ago in a work-related injury, he couldn’t participate in various breast cancer awareness walks and runs but wanted a way to show his support.

Enduring almost 4 hours of Leberecht’s 13-needle tattoo machine, was no big deal. “This is an inconvenience. This doesn’t hold a candle to what these women have gone through” Todd said he didn’t want a perfect ribbon; he wanted it to look tattered like it’s been through hell and back. “The ribbon is torn, but it’s still intact — just like my mom,” he said.

After leaving the tattoo shop, Todd and his wife Patricia drove to his mother’s home where they unveiled the tattoo. Pictured above is their emotional embrace after the

About the author of “Tattoo Tribute to Family Battles with Breast Cancer”:
Nicole Bodem is a freelance writer and a regular contributor to the Tat2X blog.

Have you gotten a tattoo in honor of someone?