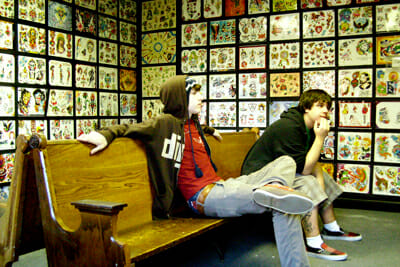 Traveling is a way of life for many, while some people enjoy traveling to experience different cultures, to meet new people or to simply escape the monotony of daily routine others are motivated to travel across the world for a completely different reason, tattoos! There is a lot that traveling can offer someone with a myriad of rich cultures to be explored and foods to eat, for example, the warrnambool cafe, so no wonder people get their inspiration for tattoos in these places.

Tattoo tourism is becoming a hot new trend. Many credit Angelina Jolie for drawing attention to this type of tourism as she has visited Thailand twice in order to get tattoo work completed by a master tattoo artist.

If you’re serious about getting ink from one of the world’s best and are not afraid of a little traveling (maybe you want to speak to a luxury travel advisor to get some ideas of where to go) check out our list of highly respected tattoo studios around the globe:

Since getting inked is a painful process, you don’t want to get hurt in the same place twice as a result of cues or a large crowd. To avoid this, instead of taking regular flights, you can book a private jet for your own convenience. You’d have the entire facility to yourself. Also, if you’re going to these places with your friends, you can have all the conversations you’ve been wanting to have with them alone. That might not be possible with regular flights. You can also split the cost of charting an entire private jet with your friends. And now, if you’re wondering how much does a private jet cost to rent, you can use the Private Jet Charter Cost Estimator to find it out.

Nevertheless, before jumping on to your airplane or private jet, its best to do some research. Its very unlikely youll be able to just wander in from off the streets. Most of these artists are booked up months in advance.

About the author of “Tattoo Tourism: A Hot New Trend”:
Nicole Bodem is a freelance writer and a regular contributor to the Tat2X blog.

How far have you traveled for Ink?