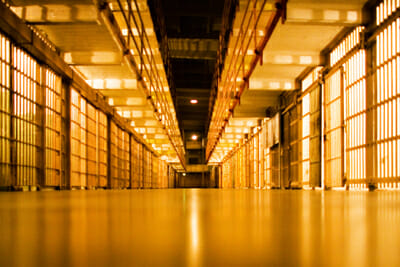 Getting a tattoo in prison is illegal in the United States but that hasn’t stopped thousands of inmates from developing creative ways to get inked over the last fifty years. Mechanical pencils, paperclips, magnets, guitar strings and staples are just a few of the implements used by prisoners to apply tattoos. They’ve made ink from melted plastic, soot mixed with shampoo, melted shoes, pen ink and melted Styrofoam. Motors for prison tattoo machines are typically built from CD or tape players. Prison tattoos are either applied through a hand poking technique or a homemade rotary tattoo machine. Although prison tattoos can be crude, many of the popular techniques and tattoo designs we see today were developed by incarcerated inmates. Their innovation and creativity has found its way into the general tattooing community. These are a few common tattoo designs that originated behind bars:

Crown – Crown tattoos are extremely popular and you’ll see many forms of the crown design on quite a few people that have never done any prison time. In prison a five pointed crown is the symbol of the Latin Kings. The Latin Kings, based out of Chicago, are one of the most powerful Hispanic gangs in the United States.

Spider Web – The spider web or “cobweb” tattoo is popular in the mainstream tattoo community but it is definitely a prison tattoo. The web tattoo design is typically applied to the elbow and symbolizes being trapped in the web that is prison. The web is placed on the elbow because it is said that prisoners rest on their elbows so long that a spider has time to weave a web on them. Many inmates serving life or long prison sentences will get a spider web tattoo during their incarceration. 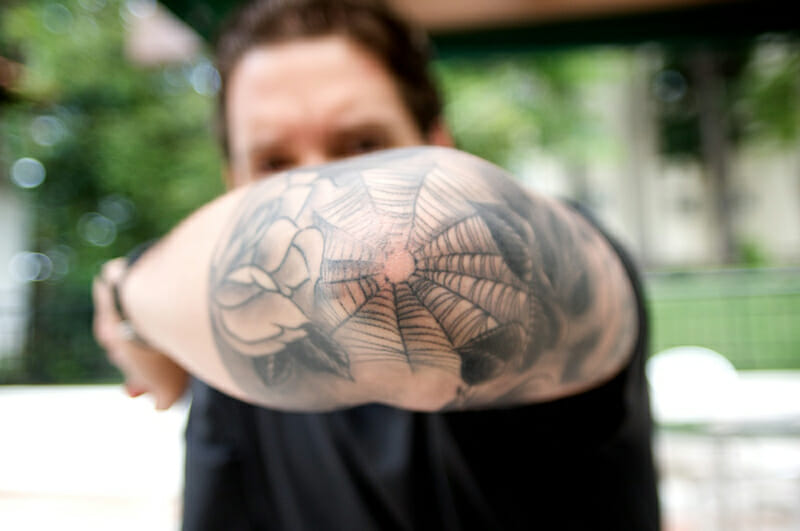 The Cross – Crosses are very popular in the tattoo community but in a Russian prison a cross tattooed across the chest means that you are a highly ranked member of the Russian mafia. Russian prison tattoos are very complicated and can take on numerous meanings depending on which part of Russia you are in.

Barbed Wire – In prison barbed wire indicates a life sentence without parole. Barbed wire is one of the most overdone tattoos in the mainstream tattoo community. You’ll see plenty of barbed wire tattoos at the gym and on the basketball court. Again, it’s almost guaranteed that the bearer of a barbed wire tattoo doesn’t have a clue what it means in the American prison system.

Lightning Bolts – Here’s a really good reason to properly research your tattoo design before getting it applied to your skin. Two lightning bolts indicate that you are a white supremacist. This symbolism dates back to Nazi Germany. San Diego Charger’s fans should beware and make sure they only get one lightning bolt tattoo in support of their team. The number eighty-eight also represents white supremacy. H is the eighth letter in the alphabet and eighty-eight stands for HH which represents “Heil Hitler.”

Stars – Stars tattooed on the knees usually indicate that the prisoner will bow before no one. Five point stars symbolize the “Bloods” gang and six pointed stars symbolize the “Gangster Disciples” an organization which originated on the South side of Chicago. Stars are incredibly popular in the general tattooing community and there’s no doubt that many people with star tattoos don’t know what they represent.

Teardrop – This tattoo is common in the prison and gang communities but has not become a popular mainstream tattoo trend because of what it symbolizes. A tear drop tattoo near the eye can mean that the inmate has committed murder or witnessed a murder. This not the kind of message you want to put out there on a regular basis if you’re just looking to get some ink. Many in the mainstream tattoo community also draw the line when it comes to getting tattooed on the face.

Baby Jesus and Mary – This universal religious symbol of Christianity means something completely different in prison. A tattoo of the baby Jesus and Mary indicates that you have been a criminal since birth. Who knew something so innocent could have such a negative double meaning?

Daggers – In the prison community tattoos of daggers often indicate that the wearer is a sex offender. Much like some of the Russian tattoos dagger tattoos are often applied forcibly to sex offenders by other inmates. Getting a tattoo forcibly in prison is not how anyone wants to get inked no matter what their crime.

The list above only scratches the surface of prison tattoo symbology and meaning. One design can mean something completely different in another country or state. Getting caught behind bars has forced prison tattoo artists to become extremely innovative in terms of technique and design. They have limited resources and almost no access to colored inks. Many credit the popularity of black and grey portrait tattoos to inmate tattoo artists. They often use hand poking tattoo application to create the pointillism effects that make up most portrait tattoos. Tattooing is an ancient art form that has existed for thousands of years but many of the popular designs we see trending today got their start in the American prison system. That’s why it’s important to fully understand the meaning and history behind any tattoo design you are interested in before getting inked. Prison tattoo artists have truly made the most of what they’ve got to work with and their strong influence on the art of tattooing is without question. On a side note, you don’t need to go to prison to get a tattoo. Instead stay out of prison and seek the advice of a professional tattoo artist on the outside.

About the Author Trip Alba: Trip Alba has written numerous press releases and featured articles for various online and print media outlets. He is a regular contributor to the Tat2X Tattoo Culture and Style Blog.

Do you know anyone with a prison style tattoo?