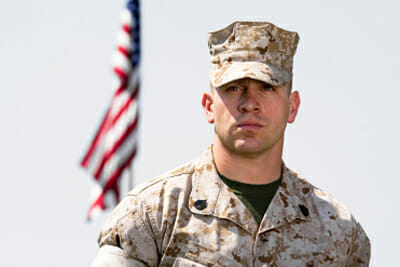 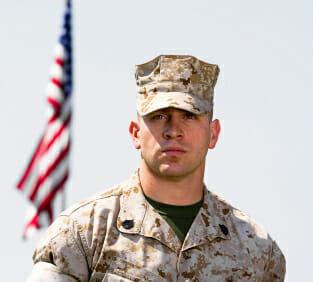 If you want to be one of the few and you have or are thinking of getting a tattoo, you should know what the Marine Corps tattoo policy is. The policy has changed over the last couple of years.

In the past, the general rule has been a Marine cannot have a tattoo on their head or neck. The tattoo could not be anti-American, sexist, racist, anti-social, or to have any gang or extremist affiliations. Generally, a tattoo of one of the official marine corp flags would be deemed acceptable.

In 2007, there were additional guidelines (Marine Administrative Message 198/07) put into place after the Marine Corps noticed an increase in sleeve tattoos. The Marine Corps considers a sleeve tattoo to be a very large tattoo, or collection of smaller tattoos, that covers or almost covers a persons entire arm or leg. When a Marine is wearing a standard physical training T-shirt and shorts, there can’t be any full, half or quarter sleeve tattoos visible.

Since 2008, Special Duty Assignments have been affected by an addition to the tattoo policy (Marine Administrative Message 494/08). Marines grandfathered for sleeve tattoos are not authorized to serve as a Recruiter (PMOS 8411) or a Marine Security Guard (PMOS 8156). The new guidelines were created because the Recruiters and Security Guards have a significant amount of contact with civilians and could influence people’s perceptions of Marines. There may be some situations where Marines not authorized may continue to work in their present assignment, but other Marines looking to switch their PMOS will be affected by the new regulations. Marine Combat Instructors (PMOS 0913), Drill Instructors (PMOS 0911) or Marine Corps Security Forces Guards (PMOS 8152) may continue to apply to serve after being grandfathered in.

* [UPDATE BELOW] * The Marine Corps has updated their tattoo policy.

The Marine Corps has just released a new document (MARADMIN 029/10) to clarify and provide additional guidance regarding their tattoo policy.

Additional Guidelines Applicable to Officers Only:

* Prior to Enlistment, applicants with more than 4 tattoos will be administratively reviewed.

What Do You Think About the Marine Tattoo Policy?