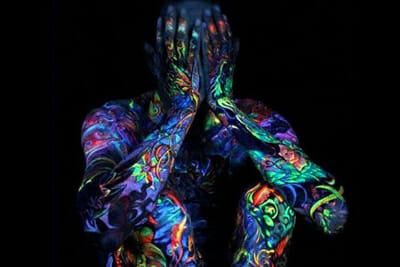 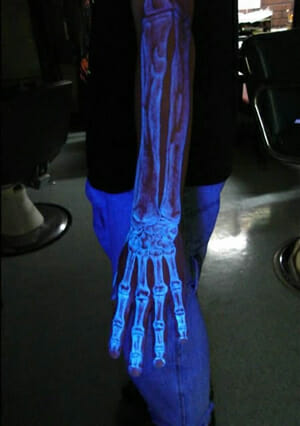 Glow in the Dark Tattoos

There are a lot of reasons to consider a glow in the dark tattoo. If you have a day job that doesn’t look fondly on intricately done tattoo sleeves, QUIT YOUR JOB! No, just kidding. Instead, consider a form of body art that no one will notice unless there’s a power outage at the office. And when you hit the club, you’ll be glowing; literally. Everyone will want to talk to you because you’ll stand out in the crowd.

Lil Wayne, Kim Kardashian and Lindsay Lohan already have these types of tattoos. So how did they get them done? Well, as you may know, regular tattoo ink is a metal, vegetable or plastic-based pigment suspended in a hypoallergenic carrier solution. For glow in the dark tattoos, artists use a solution containing phosphorus that is invisible in normal light, but in the dark watch out! You can even ink existing tattoos for added effect.

Not every tattoo artist is on board with the idea, however. Some are concerned about the safety of phosphorus itself, others are concerned with the high costs. After all, phosphorus in some forms is toxic and side effects can include severe blistering, pain, burning sensations and skin rashes. These side effects are rare, of course, but you should keep them in mind if you’re considering a glow in the dark tattoo. It should be noted that while thousands of people have gotten glow in the dark tattoos without any side effects or issues, the FDA has not officially approved the use of these phosphorous based inks. Just in case you’re wondering, phosphorous is also used in explosives, friction matches, pesticides, detergents, toothpaste and fireworks. 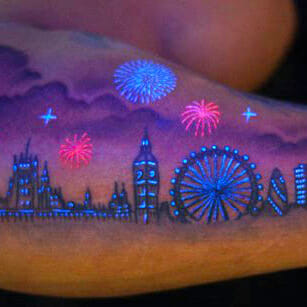 Glow in the Dark Forearm Tattoo

It would be ridiculous to expect to be hired for a job if you walked into the interview with a shirt displaying something offensive. The same holds true for tattoos. If you have a face tattoo like Mike Tyson or barbed wire covering your arms, most of the time you will be shown the door. Unless you work in a tattoo studio. Keep things within reason. You no longer need to worry about the presence of a tattoo, even a clearly visible one, as long as the message it sends, or the image displayed is appropriate.

If you’re still queasy about the glow in the dark method; consider UV tattoos which also contain phosphorous. These are still invisible during the day, but only glow underneath a black light. So showing them off might be a little more difficult but they’ll look crazy tight, so its really up to you. If you’re considering a glow in the dark or UV tattoo make sure you weigh all your options carefully and think about testing your skin’s reaction to phosphorous before you proceed.

Update On Glow In The Dark Tattoos

Word on the street is that there are new UV or black light tattoo inks out there that do not contain phosphorous and are FDA approved. However, many reputable tattoo artists won’t use any inks associated with black light tattoos or even glow in the dark tattoos because of the liability involved. The widespread practice and use of these new inks is only 10 years old so the FDA hasn’t really completed the research needed to determine whether small amounts of phosphorous on your skin will cause you harm. Even with the new FDA approved black light tattoo inks the buyer should proceed with caution.

Glow In The Dark Knuckle Tattoos

About the Author
Luke Aaron Miller is an amateur tattoo artist and long-time body art enthusiast. He lives in Texas on a peacock farm with his wife and kids where he helps maintain the website for Time Warner Cable El Paso.

Would you ever consider a glow in the dark tattoo?