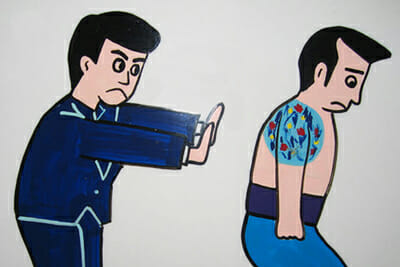 Just 175 miles from Chicago lies Bettendorf, Iowa population of just 33,040. Last year the city was known for being named America’s 95th best town by CNN Money. But, soon the city will be known for much more than that.

The Bettendorf Park Board is considering a new law that would require people visiting the city’s parks and facilities to cover up their body art and ditch their piercings. The talk of this ban came about last summer after a visitor complained about another guest’s tattoo at a water park, saying it was inappropriate. Yep, you read that right city officials are actually to regulate a person’s appearance when they visit property that their taxes pay for.

According to local news stations, Steve Grimes, Bettendorf Parks and Recreation Director says that the new policy would address issues of “decency” of tattoos that are allowed to be displayed. “We certainly want to respect people’s right to expression and at the same time, we want to respect a families’ right to have a family environment. We have to find a balance,” said Grimes.

Local tattoo shop owners think the proposed restrictions are unacceptable and say it goes against everything that the First Amendment stands for.

As a person that fully embraces body art as mainstream, I’d have to agree that regulating personal appearance is a very slippery slope.

Nicole Bodem is a freelance writer and a regular contributor to the Tat2X blog.

Is the public park board taking ‘regulation’ too far?