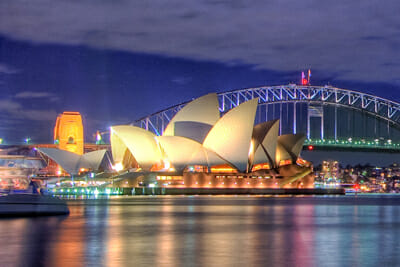 For over 40,000 years Australia was inhabited by nomadic Aboriginal tribes. Many of these Aboriginal tribes decorated their bodies with ceremonial tattoos. These tattoos conveyed information about the individual as well as the tribe they belonged to. Both the neighboring Samoan islanders and the Maori people of New Zealand have long standing tattoo traditions that have blended into Australian culture. Today, body art is a prevalent part of Australian daily life with one in seven Australians sporting a tattoo and that’s “fair dinkum!”

It’s no secret that Australians love their tattoos. Much like the United Kingdom and the United States, tattoos have become commonplace among Australians within the last twenty years. In the 1960s there were only three tattoo parlors in downtown Sydney. Today there are over fifty tattoo studios in the Sydney area and the number is growing steadily. Body art is definitely trending worldwide but it’s trending just a little more heavily “Down Under.” Fifteen percent of Australians have tattoos compared to twelve percent of Americans. What accounts for the Australian love affair with body art?

The worldwide upward tattoo trend of the last two decades is definitely affecting Australian tattoo culture but one could also argue that geography plays an important role. Australia is surrounded and influenced by many tattoo cultures including the Aborigines, Samoans and Maori tribes. The very word “Tattoo” is derived from the Polynesian word “TauTau” which means to mark or strike. To mark or strike refers to the way Polynesian tribes applied their tattoos with a poking technique and natural pigment. Although New South Wales was once a penal colony, tattoos are no longer only the domain of criminals and sailors. Australian professionals from all walks of life now have tattoos including doctors, nurses, lawyers and bankers. You don’t have to be a rock star like Rick Springfield or a famous country singer like Keith Urban to have tattoos. 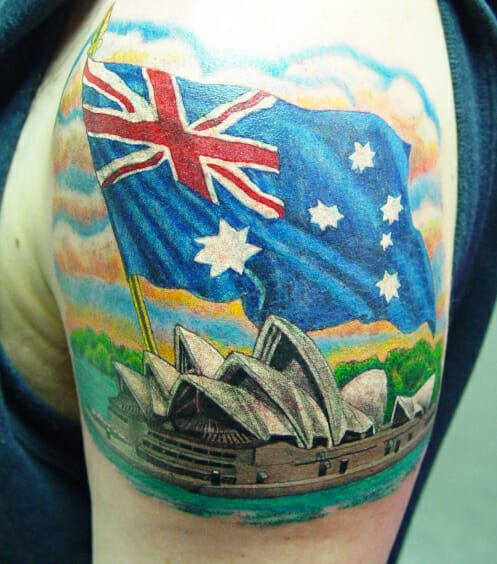 In spite of their popularity there has also been a recent backlash against tattoos in Australia. Some restaurants and hotels in Sydney have gone so far as to ban patrons with visible tattoos. News.com.au reported that the Coogee Bay Hotel in Sydney had posted a sign that read “Entry is not permitted to anyone when wearing visible tattoos.” Several restaurant owners were also quoted by News.com.au explaining that “They wanted to keep out the riff-raff” and “I don’t mind if our policy discourages young people from dining here.” It seems that if you are allowed to ban shorts and require shoes you can also ban visible tattoos in your business establishment. It’s hard to believe that any business would turn away paying customers but the sentiment in some wealthier areas of Sydney is that tattoos are in poor taste.

Tattooing is an ancient art form and it is estimated that over one hundred million people worldwide have tattoos. Body art is a form of self expression and an integral part of many cultures both ancient and modern. Tattooing is no longer an underground element and many artists apprentice for years under a master before practicing it. However, like any art form it is subject to interpretation and too often people are judged not only by the color of their skin but by the color of the ink on their skin. However, if you have a large tattoo of a bloody zombie on your forearm don’t expect any local business Australian or otherwise to welcome your presence…unless you work in a tattoo studio.

Despite the restrictions and partial backlash, tattoos are more popular than ever in Australia. A mix of cultures, both modern and ancient have come together to influence Australian daily life. Tattoos are trending “Down Under” and there doesn’t appear to be any sign of slowing as new tattoo studios from Perth to Brisbane open up every day. According to IBIS World, the tattoo industry is growing at a five percent rate per year in Australia and there are over one thousand tattoo salons registered in the Commonwealth.

Tribal Tattoo on the Beach

About the Author: Trip Albagdadi has written numerous press releases and featured articles for various online and print media outlets. He is a regular contributor to the Tat2X Tattoo Culture and Style Blog.

Australian Tattoos: Why Do They Love Them Down Under?